Tip of the Week – Compare and Contrast, the Common Core, and Google Earth

I love the start of school! Everyone is excited. New materials have been unboxed. Some might have new technology gadgets such as iPads or updated computers to experiment with in their classrooms. Teachers have learned new strategies that they want to try. And with the coming of the Common Core, many of you are busy figuring out just exactly how to implement them in your classroom.

Here in Kansas, as we work to revise our current social studies standards, I’m excited about what those Common Core literacy standards mean for history instruction in our schools.

At its most basic level? The new state standards –  created with the Common Core in mind – encourage high quality social studies instruction. Reading, writing, researching, problem solving, using primary sources, asking questions. All of these should be part of what we do. But I know for some, these sorts of learning activities are new and perhaps just a bit intimidating.

Let’s start with Sam Wineburg. Sam says that there is one main difference between historians and students of history:

Part of what we need to do when we plan lessons is to create a sense of “academic discomfort” in our students by asking questions that have no easy answers. Some of us are not used to teaching that way. So today . . . a quick example of how you can use Google Earth to encourage problem solving, develop skills of comparing / contrasting, and research.

This example hook activity was designed for high school world history teachers but could easily be adapted for US history, and with different images, for different contents / grades. First, a fast overview of what the students would see and hear and then a quick discussion of where and how to get your own images.

I begin by asking kids to look at two different images and ask them to answer what seems like a fairly simple question:

Why is there such a difference between the two images? 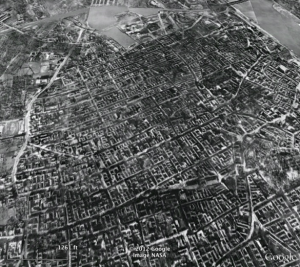 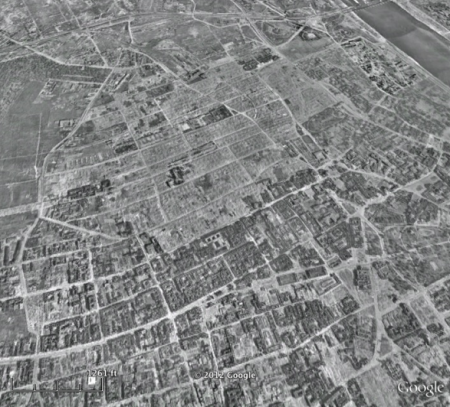 You can do this in a couple of different ways. These are obviously Google Earth images but I would probably start by handing out hard copies to small groups of students before going to Google Earth. You can also use GE to save the images to your desktop or copy the images to your clipboard for use in Powerpoint so that you can project the images for your students.

(I don’t want to go to GE just yet because of the Historical Imagery data that would reveal too much at this point. More about that in a minute. Once kids have a chance to look at the data in hard copy format and have developed some early hypothesis, feel free to jump over to Google Earth and highlight the images. I’ll also share the images with you. Hang in there.)

Ask students to look for clues in the four different quadrants of the two images. What information can they gather from a close study? Ask them to articulate what questions need to be answered first before trying to answer the main question. Where and when are the two obvious ones that they should be thinking about. But they should also be thinking about what sources of information might be available to help them solve the problem.

Because of the lack of real data in the images and the probable lack of knowledge of your students, don’t spend much time with this part. Simply ask each group to make an educated guess on place, date, and why.

Then show them the third image. 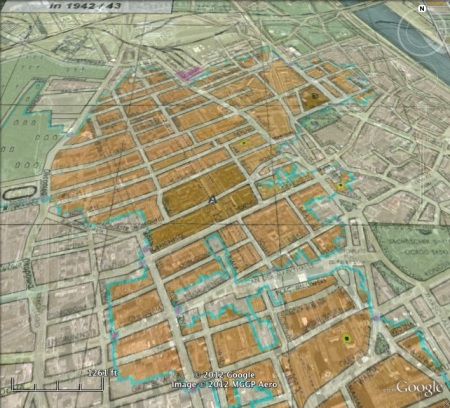 There is a bit more data here, including a little something of a date. If you’re using paper handouts, ask the kids  to lay this image side by side with the others. And on top of Image Two. Holding the two up in front of a window or bright light, reveals the overlay. A transparency and overhead projector works great for this as well.

The best way is to open Google Earth at this point and use the transparency slider on the map overlay to reveal the image below the map. The video below gives you an idea of what that looks like:

Zooming out a bit in GE reveals the entire map, providing enough data for most students to realize that these images are Warsaw, Poland at different periods in time. The first image is an aerial photograph taken in 1935 with a focus on the main Jewish area of the city. The second image is the same area photographed in 1945. The third image is a map overlay of the Warsaw Ghetto created by the German government in 1941.

Using this new information and the time and resources you provide, your students should now focus on the main problem:

Why do the first two images look different?

Many of you already know the answer.

The Warsaw Ghetto was the largest of the Jewish ghettos established by Nazi Germany in Warsaw. Between 1941 and 1943, starvation, disease and deportations to concentration camps and extermination camps dropped the population of the ghetto from an estimated 450,000 to approximately 71,000. In 1943 the Warsaw Ghetto was the scene of the Warsaw Ghetto Uprising, the first urban rebellion against the Nazi occupation of Europe. It was the German reaction to this uprising that is the answer to the question. Very simply, the Germans completely razed that area of Warsaw to the ground. Little was left standing.

The map overlay clearly shows the area where the Ghetto existed  prior to 1943 and the 1945 image shows the destruction of that area by German SS troops. Some of the infamous photos of the period can begin to put a human face on this event. A report on the actions taken by the SS reveal, at ground level, what the devastation looked like here, here, and here.

You can have students respond to the question in a variety of ways – a simple written response explaining their thinking and research using the Exit Card strategy, a quick verbal response by the group, or a more involved sort of product that requires additional research.

This sort of 30-45 minute activity supports the philosophy behind the literacy standards of the Common Core – problem solving, research, writing, use of primary sources, and compare/contrast. More importantly, this puts the learning on the shoulders of your students rather than on you.

To create this activity, I started by opening Google Earth and doing a search for Warsaw, Poland. I then clicked the Historical Imagery button in the tool bar that runs across the top of 3D viewer window. This allowed me to toggle between images of the Warsaw Ghetto area taken at different periods of time. The first option is 1935, the second 1945.

I then went to Google Earth Hacks and did a search for Warsaw Ghetto to find the map overlay file. It was then just a simple matter of copying / saving images from GE as needed and opening the map overlay in GE.