It’s not always what you see that bites you in the butt. All in with the Dorsal Fin 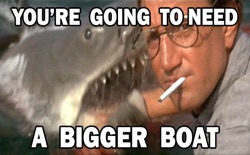 The reason why the movie Jaws is so incredibly spooky? Because for most of the film, we never really see the main character. Just the scary music and the occasional dorsal fin. We can’t see what’s under the water but we know something’s there.

Something big and hungry.

History is a little like that. It’s easy to see the surface stuff. People, places, dates. But it’s the stuff that our students don’t see that is usually the biggest and most important. Underlying causes. Past events. Hidden connections. All of these contribute to how things happened and continue to happen.

I recently ran across a handy graphic organizer idea that I think can help kids intentionally think about these hidden, under the surface pieces. The Facing History folks have titled this teaching strategy the Iceberg because it can help students organize and make sense of the different factors that lead to particular events. The strategy is also great for training kids to balance informative and literary texts, for building content knowledge, for generating text-based responses, and supporting the use of evidence.

It’s also great for organizing notes as student learn about a period in history, as a review, or as an assessment tool.

And yes. I get it. An Iceberg is only 10% above the surface of the water. You can’t see most of the important stuff. The analogy works.

But I’m going all in on the Dorsal Fin.

Same idea. We all see the fin. It’s right there. But we know it’s attached to something else. Something bigger and more important that we can’t see. Use the Iceberg if you want. I’m pushing the Fin. 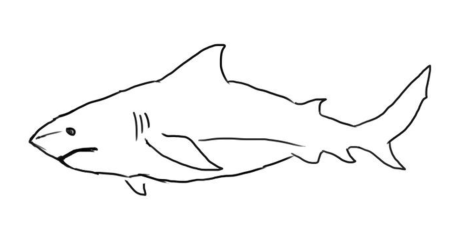 So . . . taking liberally from the fine folks over at Facing History, the Iceberg / Fin strategy. (And BTW, you need to be using all of their goodies. Some great stuff.)

Step One: Preparation
Select an event students are exploring in class. It can be an event from literature, history or current events.  Depending on how you want to use the strategy, the event may be completely new to students, very familiar with the event, or somewhere in between.

Step Three: The Tip of the Iceberg / Dorsal Fin
Ask students to list everything they know about the facts of an event in the tip / fin area of the iceberg / shark:  These questions should include:

Step Four: Beneath the Surface
Then ask your students to think about what they can’t see. What may have caused this event to happen? The prompt the Facing History people use

What factors influenced the particular choices made by the individuals and groups involved in this event?

can be written in the bottom part of the iceberg / shark to help guide their thinking. Things to think about might include previous events such as an election, an economic depression, a natural disaster, wars, an invention, a book, or a speech. Facing History also suggests that you lead a conversation into different aspects of human behavior such as fear, obedience to authority, conformity, or opportunism. It usually works best to do this part as a whole group the first time through and then small groups later so that students can brainstorm together.

Step Five: Debrief
Reflection is always a good thing and the following suggested questions can help cement the learning as journal writing or class discussion:

What can using the Iceberg / Fin look like in actual practice? The Providence, Rhode Island district uses the tool as part of its Civil War unit. Use the Fin to help students understand how American colonists won the war against a superior British military force. The causes to the Great Depression. Brexit. The rise of the West. Why China invented so many things. Jim Crow. The list could go on and on.

Need some other ideas?

Comparing events
If you use the strategy enough throughout the year, ask students to compare the graphic organizers for different events. What similarities and differences do they see? Are there common themes that seem to be present in all the events? Why? Why not? This is great for helping students recognize historical patterns, while at the same time highlighting the specific context that makes each event unique.

Current events
It seems as if most news outlets simplify current events, making them seem less complex then they actually are. Why did Brexit happen? Why is ISIS growing? (Or shrinking, depending on the news outlet.) Why is Aleppo being shelled? Why does the Republican Congress want to repeal The Affordable Care Act? How in the world did the Kansas City Chiefs win the AFC West?

Use the iceberg / shark structure as a way to help students explore and understand these types of contemporary issues. Working in small groups or as individuals, students can complete an organizer for the issue – recording details about what happened and then ideas about what they think caused the event.  Finally, use student ideas to create a whole class iceberg / shark to lead a conversation.

The New York Times Learning Network has an older article that highlights what an iceberg / shark organizer can look like when discussing current events.

Primary Sources
I haven’t tried it and I couldn’t find any online examples but I think you could use the Iceberg / Fin idea to dig deeper into a specific primary source. It wouldn’t be a lot different that what we’re asking kids to do now – source, contextualize, corroborate – but it might make it more visual. And that sometimes can make all the difference to a kid.

Character analysis
The musical Hamilton does a great job of bringing the complex lives of the Founding Fathers to the surface – helping students to see these men as more than simple cartoonish, flat, colonial Superheros. Use the iceberg / shark idea to help kids see beyond the obvious. This seems like a great way to have kids do research on specific people, tying them to events past and present.

This could work with any biography, historical play, video, or movie. I’m thinking the newly released movie Hidden Figures would be a perfect fit for this type of strategy. It would even be a nice tool for integrating the use of historical fiction such as The Pillars of the Earth, The Name of the Rose, or Shogun.

However you use it, Iceberg or Fin, the tool is a great way to help kids dig deeper into how so much of what we want them to understand is all connected.

Just don’t go back into the water.