Two words that you really don’t want to hear in the same sentence:

As in, “Hey. I can’t wait to travel to Minnesota in the middle of February.”

But when the two involve the Minnesota Council for the Social Studies annual conference, I’ll risk it. Lots of great people in Minnesota doing some awesome things in the social studies and I am honored to be a part of it. (My session on 3D History is later this afternoon – I’ll post a few details from that preso later this evening.)

I’ll be live blogging throughout the day on some of the cool stuff I’m learning. So be sure to refresh.

We are voters. We work hard at building civic engagement.

The state is the number one state in voter turnout nine of the last 10 elections because of “laws and culture.” He highlighted the efforts that Minnesota makes to ensure that voter registration is as easy as possible with same day and online voter registration. Simon also discussed how early and absentee voting is encouraged.

The state also works hard to encourage kids to vote. I like how Simon talked about how getting younger kids to participate takes more than just using idealistic arguments such as “it’s good for the country” and “it’s your patriotic duty.” Simon suggests that we need to also encourage younger voters to participate also based on self interest and “to be part of something.” That kids need to be encouraged to vote and participate because it will make their lives, and the lives of people they know, better. So Minnesota uses a massive outreach program into the school system to support this sort of civic engagement.

He shared the saying on a tee shirt:  “Choosing not to vote isn’t a sign of rebellion, it’s a sign of surrender.” They work very hard to help kids understand that participating is the smarter choice.

And with the highest rate of voter turnout anywhere in the US, something must be working.

Session One
Introducing Islam to Non-Muslims

The session is being led by representatives from the  Islamic Association of Mankato. And it’s packed. The goal of the

session is to explain and focus on sharing the basics of the Islamic faith. I really like their idea of using a tree with roots and branches to highlight the details of Islam. They also discussed a variety of misconceptions surrounding Islamic beliefs and behaviors.

This is the type of session that we all need – understanding the diversity of cultures and beliefs that are part of the United States is vital to ensuring that we truly live out the values expressed in our founding documents. Another great resources would be the Teaching Tolerance site that has a variety of articles and teaching tools that can help you and students learn more. The Minnesota Islamic Resource Group also has a list of books and resources organized by grade level.

I love Shana and the stuff she shares! This morning she’s talking about the very cool ESRI ArcGIS StoryMaps:

Maps are perfect for highlighting people, places, events, and ideas.

It’s a different set of literacy skills that can encourage high levels of historical thinking.

The StoryMaps tool is perfect for this sort of storytelling. Get Shana’s presentation and her notes to all of her goodness and tutorials. Go to the StoryMaps gallery to get some ideas of the possibilities. And be sure to check out their GeoInquiries lesson plans.

Her best tip? Never start your StoryMap on the actual ESRI SToryMap tool. Always storyboard your map out using paper and pencil or a Google Doc with your images, narration, and flow all planned out before jumping into the actual mapping tool.

The focus was on using four different reading strategies: pre-reading, during reading, post-reading, and vocabulary. Using the ReQuest pre-reading activity helps increase student comprehension of text by getting them to ask their own questions as they read a passage of text. 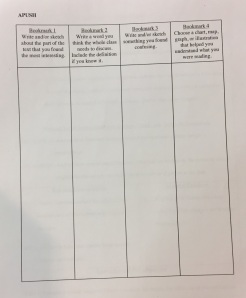 The Bookmark Technique encourages students to monitor their understanding and make evaluative judgments about aspects of text during and after reading informational text. It’s designed to guide students’ thinking.

Note Cue Cards is designed to help students gather and organize important information in a non-threatening way. The teacher generates question, answer, and comment cards in advance and uses the cards to help “cue” higher levels of conversation.

Multimedia Vocabulary Review is tactile, hands-on way to support contextual uses of vocabulary words that students encounter in evidence and text. I think this could be especially powerful for primary sources.

Don’t Know Much About History series author Kenneth Davis shared about the motivation behind his most recent book, In the Shadow of Liberty: The Hidden History of Slavery, Four Presidents, and Five Black Lives. Written for middle and high school age students, the book has already received several awards:

Davis tells the stories of five enslaved people who were “owned” by four of our earliest presidents, helping to set the record straight about the role slavery played in the founding of America. From Billy Lee, valet to George Washington, to Alfred Jackson, servant of Andrew Jackson, these dramatic narratives explore our country’s past – of people conceived in liberty as well as those born into slavery. These stories help us know some of the real people who were essential to the birth of this nation but traditionally have been left out of the history books.

Kenneth mentioned the research necessary to tell the story of the five enslaved persons.

The primary and secondary sources are out there. Because the enslaved persons documented in the book lived and worked literally beside these four presidents, their lives were recorded in ways that the vast majority of enslaved persons never were.

He also shared more about the legend of Dolly Madison saving the George Washington portrait during the War of 1812. The story making the round in the 1830s was that Dolly cut the picture out of the frame and left the White House just ahead of the British.

But in 1865, Paul Jennings – a servant formerly enslaved by James Madison and now emancipated –   recounted the true account of the Washington painting rescue. Davis went on to share more about Jennings’ family and their involvement in the Union cause during the Civil War.

Davis went on to discuss how much he enjoys working with student groups:

About five years ago, I started Skyping with more and more classrooms. In 2011, I started talking with classes about 150th anniversary of the Civil War. Kids were very interested, motivated, and very curious. So talking with students really gave me the sense that the best way I could have an impact with kids is to start writing to them directly. In the Shadow is the result of that. I didn’t pull any punches talking about these stories – I think kids need to be aware of this part of our history. It’s important that we all struggle and wrestle with the facts. And it’s very gratifying to find ways to connect with that particular audience.

Davis is offering free Skype classroom conversations for teachers. Find out more. He also suggested the Lives Bound Together site from Mount Vernon and Enslaved Families of Monticello.