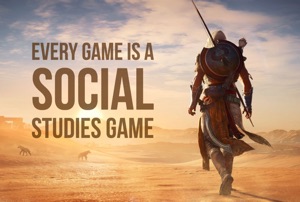 The video game Assassin’s Creed: Black Flag came about five years ago. And as an avid fan of Assassin’s Creed, my son and his friends were some of the first in line to purchase it. And play it.

If you’re not familiar with the Assassin’s Creed line of video games, they’re basically an action adventure featuring a centuries old struggle between two groups of people – the Assassins, who fight for peace and free will, against the Templars, who believe peace comes through control of humanity. There’s fighting, walking around, some fighting, sneaking around, more fighting, some running, and then some more fighting. Fairly typical video game.

The thing that makes the series a little different than many other action adventure or first person shooter games, is the creators of Assassin’s Creed have been very deliberate about mixing the historical fiction of Assassins vs. Templars with real-world historical events and figures. In Assassin’s Creed III, for example, the setting is the American colonies before, during, and after the Revolutionary War. And there’s a cut scene depicting a version of the Boston Massacre that does a great job of creating the sense of place around that event, perfect for creating a idea of what that event might have looked like and the ambiguity around how the event transpired.

My son experienced the same sort of historical involvement when he was playing Black Flag. Set in the 18th century Caribbean during the Golden Age of Piracy, Black Flag obviously was telling a fictional story. But to be successful in that story, players need to know a lot about what life was like during that period and in that place. I asked him later about his experience:

I learned more about the relationship between European colonial powers and about the events of the period by playing the game than I ever did when I was in school.

I wasn’t that surprised. I’ve heard similar stories from other students and adults. More and more teachers are starting to realize the power of using video games as instructional and learning tools. Marc-Andre Ethier, a history professor working with Assassin’s Creed, agrees:

. . . a student, left to themselves while doing these tours, could learn a lot without someone necessarily telling them ‘You should learn this.’

But I think that there are still some who are a bit reluctant to think about what it can look like in a classroom setting.

It’s a little like one of my favorite books that I use with K-8 teachers. Titled Every Book is a Social Studies Book, it highlights ways to use all sorts of chapter and picture books as part of social studies instruction. It’s a great resource and it highlights the fact that every book is about people or place or period. And that as teachers, we can find instructional activities in every book that we pick up.

When we teach, we try to help them to be immersed in that kind of environment. I think the students will remember it more when they can feel it.

But my belief comes with a catch.

The Assassin’s Creed series is a perfect example. It’s a great social studies game. But it has fairly graphic violence and asks that players behave in ways that . . . mmm, don’t align with the codes of conduct in most schools. Yes, you can use cut scenes like the Boston Massacre. You can have kids plot out alternative endings. Kids can play certain pieces of the game such as learning to pilot a pirate ship.

But to use the whole thing? Probably not a good idea.

There is now a stand alone piece to the latest Assassin’s Creed: Origins game that eliminates the violence around the Assassins vs Templars fictional pieces and focuses just on the historical parts. Giving us the chance to take advantage of amazing graphics and immersion not really available with most of our other teaching tools. How sweet is that?

Following last year’s release of Assassin’s Creed Origins, set in Ptolemaic Egypt, the team behind it decided that allowing players to learn more about life in ancient Egypt might make for a pretty cool teaching aid. So they traded in the quests and violence for antiquities and history lessons, and created a mode with a series of Discovery Tours. By putting history front and center, the game gives you a new way to connect with students.

The stand-alone version of Discovery Tour by Assassin’s Creed: Ancient Egypt is designed for PC computers, even those with aging hardware.

In this version of the game, students guide an avatar that they select. It can be the sheriff-like character Bayek, the original protagonist of Assassin’s Creed Origins, or one of 25 possible others including Bayek’s wife, Aya; their son, Khemu; Cleopatra; Julius Caesar; Roman legionnaires; and even ordinary Egyptian, Greek, and Roman adults or children.

Maxime Durand, resident historian for the Assassin’s Creed franchise, shares the history behind Discovery Tour itself, how the concept began and grew, and what exactly players can expect when they start exploring a nonviolent, information-rich version of the game’s Ancient Egypt.

A voice-over details the objects on view, including artifacts like pottery, scrolls, farm tools, and baking ovens. The 75 available tours cover daily life, monuments, agriculture, the lives of Greek and Roman settlers, and other topics. At some locations, non-playable characters are seen performing tasks like baking bread, tilling a field or inscribing scrolls. Students can elect to have their chosen avatar perform the activity. Maybe Cleopatra and Caesar never knelt before a bread oven to remove a hot loaf from the coals but here your kids can have that experience.

Check out this review of Discovery Tour and get a sense of what it might look like from the trailer:

Discovery Tour by Assassin’s Creed: Ancient Egypt is available on PS4, Xbox One, and PC as a free download for players who already own Assassin’s Creed Origins, and is also available as a standalone game on PC via Uplay and Steam for $19.99.

Need some more ideas on using games in the classroom?