Living on the cloud 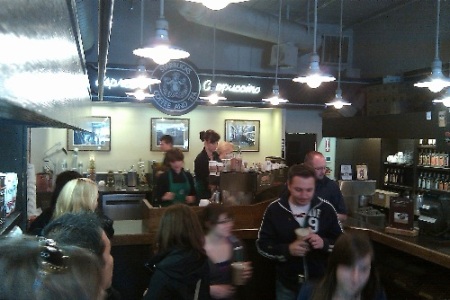 I spent much of last week in the beautiful Pacific Northwest with my son.

I didn’t take my laptop. On purpose.

And, yes, I had some serious withdrawal symptoms. It had been a while since I had been anywhere without my computer so it took a bit getting used to not having it around.

But I wanted to try and live the entire week on the cloud – no laptop, just an iPad and a Droid smart phone. Could I access and answer email, text, take photographs, scribble out blog posts, create presentations and write documents with just the iPad and phone? More importantly, could I do such things easily?

At least for me, not so much.

I was able to do most of what I needed to get done. I did start several documents and presentations after purchasing the Pages and Keynote apps (at $10 apiece). Posting content on my blog was possible though I wasn’t able to easily edit content at my Social Studies Central Drupal site. And, of course, my phone allowed photographs and text.

The question of the week was ease of use. And I struggled with the keypad, internet access, email issues, web sites that Apple doesn’t like, Google Docs and sharing content with others. So . . . it was possible to live in the wild without my trusty laptop but there is a learning curve.

During our time in the Seattle / Portland area, we used a lot of public mass transit. And for the most part, it works. But everything you do – schedule, location of stops, comfort level – is dependent on the public system. Having your own car is just too handy.

Living on the cloud is a bit like that. You can do it, there are workarounds and tools exist that help but right now, it’s just a bit uncomfortable. If I had my choice, I’ll take my laptop anytime.

The iPad is a remarkable media consumption tool and in a closed school environment, living on the cloud would be much easier. And given the price and interface, an iPad does make a lot of sense. Especially for K-8. But I’m not yet entirely convinced.

I need to play some more. I’ll keep you posted.

Teaching your kids to cheat

I spent some time last week talking with a group of high school teachers concerned about the use of mobile devices such as cell phones and iPods in classrooms. One of the concerns raised was that handhelds can be used to cheat.

Your students are cheating. They’ve always been cheating. And they’re not going to stop cheating.

The difference in 2010 is that if we as educators try teaching in “traditional” ways, cheating becomes easier. Easier because if I’m a kid, there are all sorts of things online that I can find that help me cheat.

To get a sense of how much is out there, do a quick YouTube search for “how to cheat.”

Kids will always try and find ways to survive by doing less. It’s not really about handhelds so much as us rethinking how we do our jobs. Traditional forms of instruction will always encourage cheating by focusing on basic, low-level sorts of learning. And if we continue to use strategies that encourage simple rote memory and fill-in-the-blank sort of thinking, new forms of technology such as handhelds will make it even easier to cheat.

A recent Reader’s Digest article (and others) document the trend. It’s not going away. But we can work to change how we do our jobs, including the use of handhelds, so that cheating becomes more difficult and less frequent.

One of the first things we can do is re-think how we define the word. It’s interesting that people who play a lot of video games use the word differently. Cheat becomes not just a verb but a noun, as in – a cheat is any help when solving a problem. This help could be a web site, a video or another gamer. The idea being that working together is a good thing.

And while academic dishonesty will always be wrong, we should begin thinking about “cheating” in the sense of collaboration and cooperation. K-12 schools and our assessments should look more like that. We need to encourage kids to “cheat” in a positive way – working together, sharing resources and collaborating with outsiders.

All of these require high level thinking and collaboration between students without providing an easy way to cheat.

Jason Stephens and David B. Wangaard have a useful article titled Teaching for Integrity that shares strategies for preventing cheating. You can also find some handy tools and resources on my Social Studies Central site.

Because of changes in the Alltel / Verizon world of cell phones, the ESSDACK office was forced to switch from older phones to the newer Droid model. So . . . a steep learning curve this morning.

And not just a steep learning curve for me but one for K-12 education in general. Web-based handhelds in all forms (iPhones, Blackberries, Droids) will change the way we do school. At the very minimum, students with these types of devices will be able to access information while at school outside of the traditional filtered internet network.

Kids have always found ways to get around school internet filters. Web-based handhelds just make it easier. The question isn’t whether or not this is going to happen.

how should schools respond?

Many school districts already have cell phone bans in place. (In some urban districts, businesses have sprung up around middle and high schools that will store student cell phones during the school day.) And in most of those districts, the answer to the question is to become even more draconian in their enforcement. Schools have been working for years to get more computers in the hands of their students but don’t want them to use the computers they bring to school every day.

There are issues that should be discussed – appropriate phone AUPs, protection from inappropriate sites, time on task, effective learning strategies – but for schools to suggest banning handhelds completely is the answer seems very short-sighted.

(Sent from my Verizon Wireless Phone)