Tip of the Week: Using board games for teaching and learning 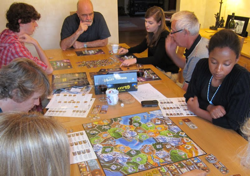 Video games and simulations have always been part of my instructional DNA. I started out with a basic but powerfully engaging archeology simulation during my first month in the classroom, used text-based games to teach medieval Japan, added PC based simulations to highlight economic impacts, integrated cutscenes into instruction, encouraged the use of game specific wikis for building content knowledge and have watched first person shooter console games used to embed students into World War II.

I’ve also had the chance to work with a variety of software developers to pilot several different computer and online based simulations. So . . . yes. A firm believer in the use of video games and gaming theory as part of teaching and learning.

But not until recently have I given much thought to using board games in the same way as video games and sims. Most social studies teachers have incorporated some sort of paper-based or board game-based simulation as part of they do. But there is a whole different level of board game out there. This is more than just Monopoly or the simple roll the dice to see what happens to your Gold Rush bound wagon train.

Called Eurogames, this new form of game developed in the 1990s, combining simple rules and strategic complexity. The games put a premium on interacting with other players, long-range planning and managing limited pools of resources. Unlike traditional games like Monopoly, they de-emphasize direct conflict between players; capturing enemy pieces or eliminating opponents are rare occurrences.

Mostly board games, Eurogames emphasize strategy, downplay luck and conflict, lean towards economic rather than military themes, and usually keep all the players in the game until it ends.  In contrast, many American-based games involve more luck, conflict, and drama.

The cool thing is that much of the brain research supporting the use of video games also applies to board games:

And because board games are so much cheaper to produce, there seems to be a ton of them that can help focus the learning in a social studies classroom. So where to start?

MidAmerica Nazarene University in the metro Kansas City area just started their Center for Gaming and Learning. They have some handy research as well as library of games for checkout. If nothing else, their list will kickstart your thinking.

The Genosee Valley Educational Partnership has a similar thing happening. Resources and actual games for checkout. Use their search filter to find games specific to your grade and content.

Board Game Geek has a ton of stuff specifically for board gamers including a list of game friendly games. The ReadWriteThink folks have a nice piece on using board games to support technical reading and writing. Edutopia shares ideas of using games for assessment and engagement. Browse through this Slideshare preso on board games for some ideas. And this article on kids making their own games is a perfect fit with the current MakerSpace movement.

Need a bit longer read? Libraries Got Game: Aligned Learning Through Modern Board Games by Brian Mayer / Christopher Harris and Everyone Plays at the Library: Creating Great Gaming Experiences for All Ages by Scott Nicholson are both useful. While they do focus on how libraries can use board games, there is a lot of overlap with the K-12 social studies world.